THE PERFORMANCE, THAT BECAME VIRAL 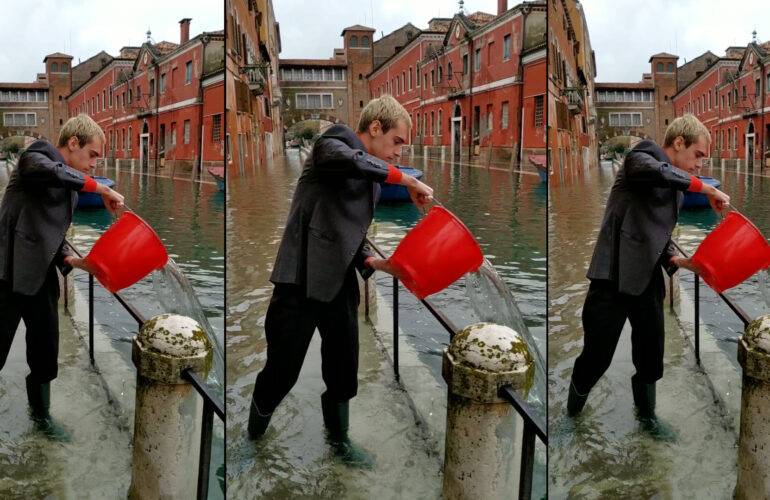 Yurii Polishchuk (Kyiv) about the collaboration “ViralHog” (Artist — Bohdan Moroz; Curator — Yurii Polishchuk), the result of which is presented at the “(Re)contexts. Fragments” exhibition (from March 4 till April 12 in the “Small Gallery of the Mystetskyi Arsenal”).

Bohdan Moroz’s life as an artist began in 2015. Firstly, he worked with an intermedia art, looking for the most appropriate media for each statement. Over the years, he gradually moved from complex reflections and working on personal traumas to the socially engaged, playful and straightforward art.

While working as a performer in the Ukrainian pavilion of the “La Biennale di Venezia”, Bohdan Moroz received an invitation from the curator Stas Kholodniy to participate in the “Fake Performance Festival”. The artist agreed and recorded a video with an improvised performance as a reflection towards people’s actions during the floods in Venice. Bohdan replicated the movements of the employees of cafes and different shops, who instead of saving their workplaces just beat about the bush. That’s how he tried to stress the topic of unnecessary work.

The video became viral. It was viewed in the social networks by ~40 million people, which is quite unusual for Ukrainian art. Everything started with Instagram, which became an art platform quite a long time ago. Bohdan’s work received long-awaited feedback and reactions. There were hundreds of thousands of comments, and more than 1/3 of viewers thought that those actions were not a fiction or performance, but real ones. It also shows the advantages of the art, which leaves the gallery space and comes into the life of real and virtual cities. Such works could be seen by a larger audience as well as involve the viewers into the performance itself. Also, the topic of artists’ work is raised here. As well as the prehistory of the performance, while Bohdan worked as a performer at the Biennale 6 days per week. And this video performance was the first work, that Bohdan managed to sell. After the video became popular, he signed a contract with the American company “ViralHog”, which received full rights to the video and 50% of the revenue (now Bohdan has $580 on his account, but the amount of money is growing). And that’s why the work is called “ViralHog”.

“This is me talking to my boss”, “Yes, I’m solving my problems” — these are the most popular comments to the Bohdan Moroz’s performance, which became a meme. In world art, it’s not a unique situation when artists’ works become memes. The works of Marina Abramovich and Damien Hirst were already iconic when they became memes. But in the case of Bohdan’s work, it was called a meme before it was acknowledged as a piece of art.